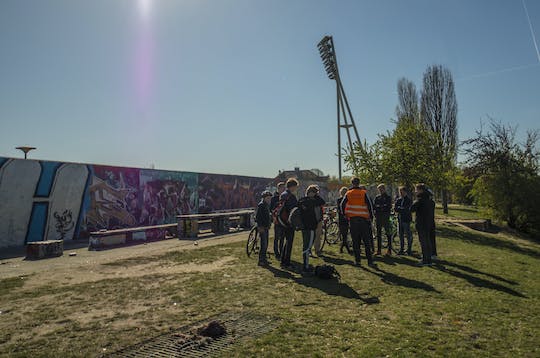 Pedal with your group from the Bornholmer Straße up to the Government District, follow the visible and hidden remains of the Berlin Wall and learn more about everyday life in East-Germany during the Cold War and Stasi time.

Get to know the political dimensions, the background circumstances and, above all, the human element in the everyday struggle of life in a divided city, right where it happened. During the bike tour, you will see the Mauerpark, where a part of the former “death strip” has been transformed into a vibrant part of the new Berlin, and the official Berlin Wall Memorial on Bernauer Straße with a guard tower and the last remaining, totally intact portion of the Berlin Wall.

You will have a private guide at your complete disposal. Familiar with popular sights, hidden gems, their moving history and the best bicycle routes in town, he can easily adapt the bike route to your personal interests.

Enter the Kulturbrauerei on Knaackstraße 97, just beyond the intersection with Danziger Straße. From there just follow the yellow Berlin on Bike signs

Enjoy your own personal bike tour to the main attractions of Berlin! Pedal along the beautiful Museu...